Since its inception, CMCF has selected promising physicians for fellowship grants not only for their strong scholarship, but for their enthusiasm and leadership potential.  Many of these former fellows have risen to positions of prominence within the medical establishment of their native countries, accelerating the pace of pediatric care improvement.  Others have emerged as regional-and in some cases, international-leaders in particular procedures or areas of specialization.  Still others have been elected to head specialty societies. We invite you to meet a few such international medical bridge-builders who exemplify what CMCF Fellowships help make possible.

The world of pediatric kidney care lost a giant when Professor Teresa Wyszynska passed away on September 20th, 2014. Professor Wyszynska was a true pioneer, whose contributions to the field were monumental.

Professor Wyszyńska was also one of the first two recipients of a Children’s Medical Care Foundation Fellowship, and traveled to Los Angeles in 1982 to improve her medical knowledge training at UCLA’s world-leading nephrology department.

Upon return to Poland, Doctor Wyszynska was instrumental in helping the Polish Ministry of Health to introduce Continuous Ambulatory Peritoneal Dialysis (CADP) nationwide. This new, portable form of blood filtration was extremely helpful at a time when there were only enough dialysis machines in Poland to treat three out of ten who suffered from catastrophic kidney diseases.

In addition, Professor Wyszynska was a leading researcher, having authored over a hundred studies that have appeared in numerous Polish and international medical journals. She also contributed to numerous books, including the medical textbook, Diseases of the Urinary Tract in Children, which she co-authored with another former CMCF Fellow, Professor Maria Sienawska.

Professor Wyszynska will also be remembered as an excellent teacher who helped nurture the development of successive generations of specialists in the field of pediatric nephrology, which she is considered by many to be the leading Polish figure in this medical specialty.

Professor Piotr Kalicinski is the Head of the Department of Pediatric Surgery and Organ Transplantation at the Children’s Memorial Health Institute, Warsaw, current President of the International Pediatric Transplant Association, and one of the foremost pediatric surgeons in all of Europe.

Professor Kalicinski first received a CMCF Fellowship grant in 1988 to learn more about transplantation at UCLA Medical Center, one of the world’s most highly-regarded medical institutions and a leader in pediatric transplantation.

Upon return to his home hospital, Professor Kalicinski initiated a program specializing in Liver Transplantation, and was part of the team that performed the first successful liver transplant procedure in Poland at the Center for Children’s Health in 1990.

Professor Kalicinski has served as the Chairman of the National Council of Transplantation of Poland’s Ministry of Health since 2006, and has been Poland’s national consultant in pediatric surgery since 2008.  He also heads the Department of Emergency Medicine at the University of Rzeszow.

Less well known about Professor Kalicinski is the fact that his father, Professor Zygmunt Kalicinski, a groundbreaking pediatric surgeon himself, was instrumental in helping found CMCF, making initial contact with its founder, Dr. Stefan Wilk, on a visit to the United States in 1979, and sharing his idea of setting up a medical exchange program between the US and Poland. 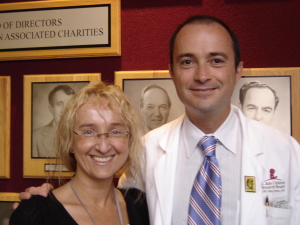 Dr. Anna Raciborska is the first recipient of the Dr. Stefan P. Wilk Award, named for CMCF’s founder and given to a promising physician pursuing research of an extended nature toward the treatment of a rare pediatric disorder.

Based at the Department of Surgical Oncology for Children and Youth, Institute of Mother and Child in Warsaw, Dr. Raciborska conducts research into Ewing Sarcoma, the second most common malignant bone tumor in children, a form of bone cancer.

Along with advancing medical understanding in the oncology field, this unique two-year research Fellowship will culminate in Dr. Raciborska’s attainment of habilitation, the highest academic qualification a scholar can achieve by his or her own pursuit in many countries in Europe, which brings with it the title of Professor.