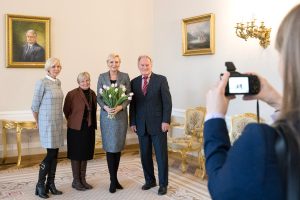 The first lady met on Monday at the Presidential Palace with Bjoern Martinoff, the president of the Children’s Medical Care Foundation and his wife Jolanta Martinoff. They were accompanied by prof. Maria Katarzyna Borszewska-Kornacka, head of the Neonatology Clinic of the Warsaw Medical University in the. Ks. Anna Mazowiecka.

For more than 30 years, the Children’s Medical Care Foundation has helped significantly in the development of Polish medicine by providing training and support for the research of Polish neonatologists, pediatric oncologists, anesthesiologists and pediatric surgeons in world renowned medical centers. Recently, pediatricians have also supported the eastern border of Poland, especially in Ukraine. Training programs in the role of lecturers are attended by Polish doctors.

The Children’s Medical Care Foundation (CMCF) was founded in Los Angeles in 1981 by its chief founder, Stefan Wolf, a professor of medicine at the University of California, Los Angeles. On the Polish side pioneers of cooperation with the CMCF were outstanding pediatric surgeons prof. Zygmunt Kaliciński and prof. Kazimierz Lozinski both from Warsaw, and from neonatologists prof. Irena Twarowska from Poznań, creator of Polish contemporary neonatology.

During the interview, Agata Kornhauser-Duda thanked the Foundation for its commitment and activity to Polish neonatology and initiatives supporting premature babies and their parents.